I admit it. Cajun cracklins are addictive,  I am a recovering cracklin’ addict and am now in a 12-step program on the way to enlightenment.  Okay, so I am embellishing a bit.  But, just a bit.  Hear my story. 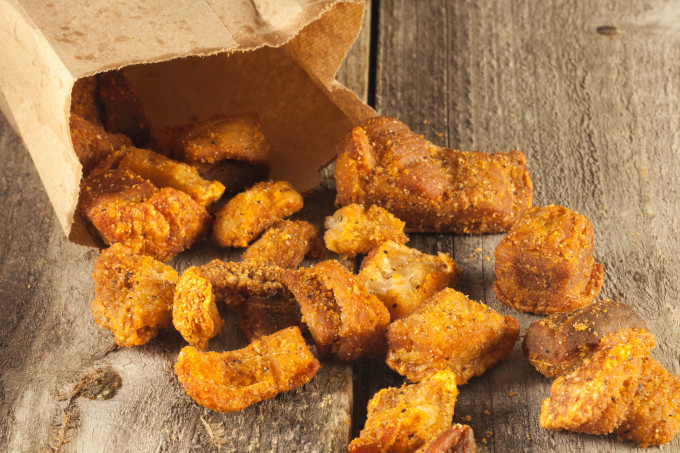 Crispy, crunchy, and addictive, Cajun cracklins are one of the most popular of all Cajun recipes. (All photos credit: George Graham)

I was first grabbed by the demon porcine pleasure at a later stage of life when I should have known better.  What is essentially fat fried in fat should have been an obvious clue to anyone with a college education.  Or the little grease-stained brown paper bags should have certainly been a tip-off.

I was hooked fast.

The fact that most every little store around Acadiana sells pork cracklin’ (also known as grattons) at the register certainly bodes well for how far this porky addiction has spread.  Oh, I tried to quit, but Earl’s Cajun Market, my neighborhood pusher, drew me back in every time I opened the front door and breathed in the heady siren call of bits of pig frying in a black iron cauldron of lard.  I can’t resist the bacony flavor or the contrast of crunch with the smooth ooze of pork tallow.

Cajun cracklins are described by most as the by-product of the boucherie, a Cajun celebration of the slaughter of a whole hog.

I believe it to be the main product, and everything else is an afterthought.  The skin and tasty bits of fat surrounding it are lovingly boiled in oil, tended gently and brought to the peak of crispness.  It is an art form.

Cajun cracklins are not for everyone.  These little taste bombs will decimate your diet, derail your noble sensibility and send you down the path of sinful consumption.  Be warned.  These little bags sold on every street corner in Cajun country are just the start.  Soon you’ll be smothering a sausage-stuffed pig’s stomach, roasting a boudin-stuffed pork loin, and Lord forbid, making a fried pork jowl BLT.  Don’t say I didn’t caution you.

Over the years, I’ve embarked on a healthier lifestyle that no longer includes this delicacy, but, from time to time, I have been known to come home with grease-stained fingers and a look of guilt on my face.  And from the acrid smell of my clothes, my wife knows immediately that I’ve fallen off the wagon once again.

Curse you for being so decadent and deliriously delicious. 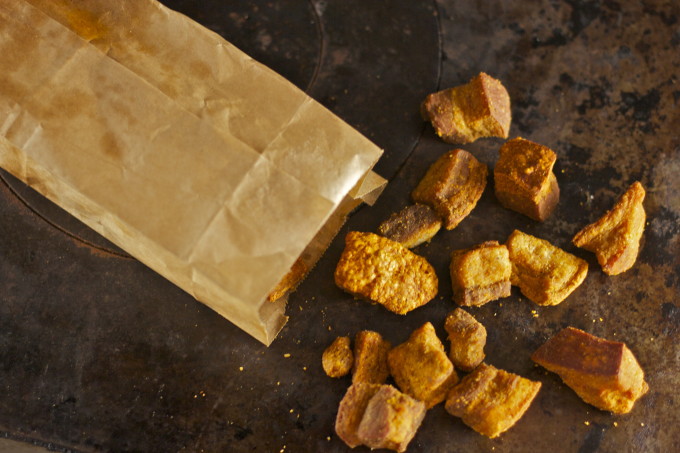 Cajun cracklins – relapse in a bag!

Cracklin’ is more an artisan craft than a Cajun recipe.  There are varying methods for Cajun cracklins as with gumbo, and they are all correct, as long as they achieve a quality product.  Some like to start the cubes of fat off in water, but I am going with the “fat-in-fat” method.  You’ll need a very large pot – I use a deep, 20-quart black iron pot —  and an outdoor burner with a paddle.  After that, the only main ingredients are rendered hog lard and pork belly.  But, that’s where the simplicity of cracklin’ comes to a screeching halt.  It takes trial and error to get it right, and in South Louisiana there are generations of families that pass down this time-honored Cajun cooking tradition. 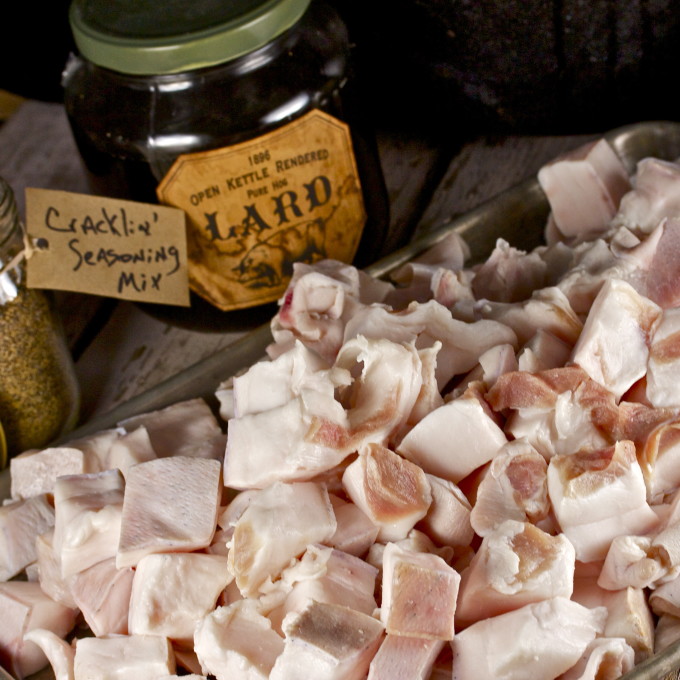 Basic ingredients for a simple recipe of Cajun cracklins.

Before you begin:
Find a butcher that understands pork and the art of the recipe for Cajun cracklins.  There needs to be just the right amount of skin, fat and meat. Some prefer the back fat and some prefer the belly.   Have the butcher cut the cracklin’ fat into strips.  They will shrink to approximately thumb size during the cooking.

If you live in an apartment, forget it. This is an outdoor adventure only since both the overwhelming smell of fat frying in fat along with the risk of a pork fat inferno are prime reasons to take it outside.  A big black iron pot, long-handled spoon or paddle, oven mitt, a variable heat source and a thermometer are the key equipment needed. Oh, and you might want to wear a long-sleeved shirt and protective eyewear. 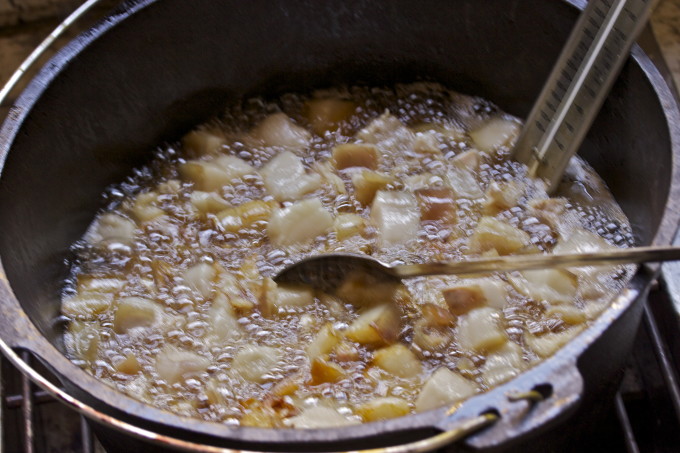 Be careful of popping grease in the first fry.

The first fry:
With the pot on a low fire, add all the pieces of pork fat to the pot.  Pour in enough lard to come 3/4 of the way up to the top of the fat.  Be careful in this first phase of cooking as the moisture trapped in the fat cubes will burst and create little grease bombs (thus the long-sleeved shirt and glasses).

Here, the long slow process of the first rendering of fat is crucial as you begin to reduce the raw pieces of pork revealing the meat.  The lard should be on a low fry around 225 to 275ºF, and the continual movement of the fat by stirring with the long-handled spoon will keep it from sticking together.  Repeatedly stir the pot every 3 minutes or so. 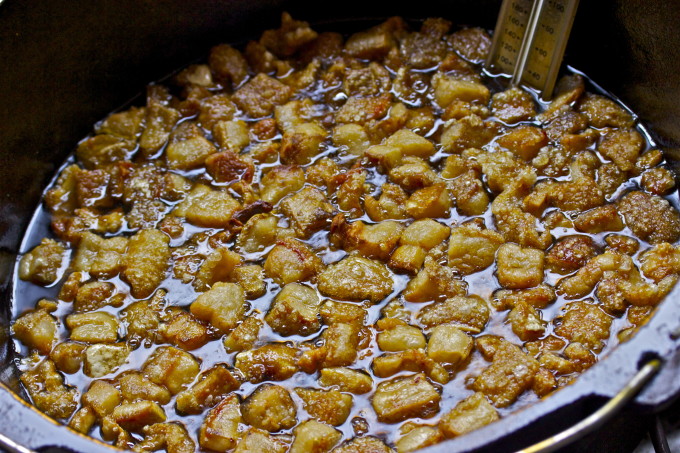 As the Cajun Cracklins cook, continually check the temperature of the oil.

There are some important physical principles to remember.  The grease will get hotter and will increase in quantity as the fat melts off the pork.  It is important to use a thermometer to check the temperature of the lard since the longer it cooks the hotter it gets.  Lower the fire to lower the temperature. Ladle off some of the lard if it increases to a dangerous overflow level.  Continue to cook for what might be close to 1 hour or more.

Once the cubes of pork have rendered and achieve a tan brown color remove the cracklin’ to a metal wire rack on a tray. 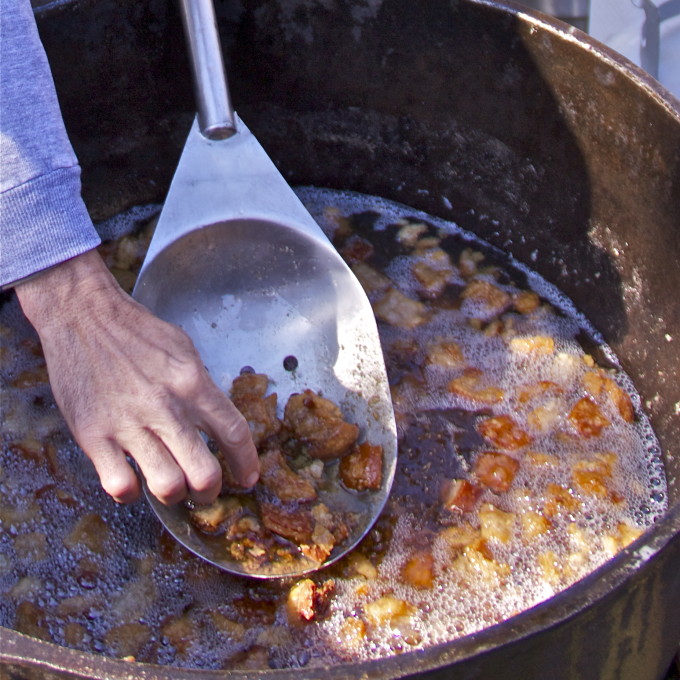 Checking a batch of Cajun cracklins for crispness; this is just part of the way through this Cajun cooking process.

The second fry:
It’s just like twice-fried potatoes.  The science of heating oil to varying temperatures and returning the product to a higher, flash-fry heat achieves something miraculous in taste and texture.  Once-fried cracklin’ can become extremely tough and difficult to bite through the exterior skin.  This second fry will crisp the skin — some say “pop” the skins —  that literally defines Cajun cracklins.  (Note:  Some folks like to add a handful of ice to the oil at this stage, but I haven’t experienced that technique.  It supposedly makes the grease boil rapidly and “blisters” the skin crisp.  If you try it, be careful.) 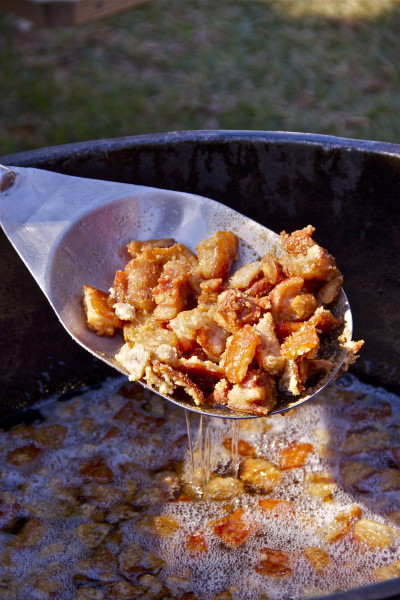 Continue to cook until they begin to achieve a rich, golden brown color.  This is a crucial stage since some of the cracklin’ will cook faster than others so remove in stages based on color.  Remove the cracklin’ to a large tray with a wire rack lined with paper towels to soak up the grease.   Season with salt and Acadiana Table Cajun Seasoning Blend (see recipe here).

Open an ice-cold can of beer and enjoy. 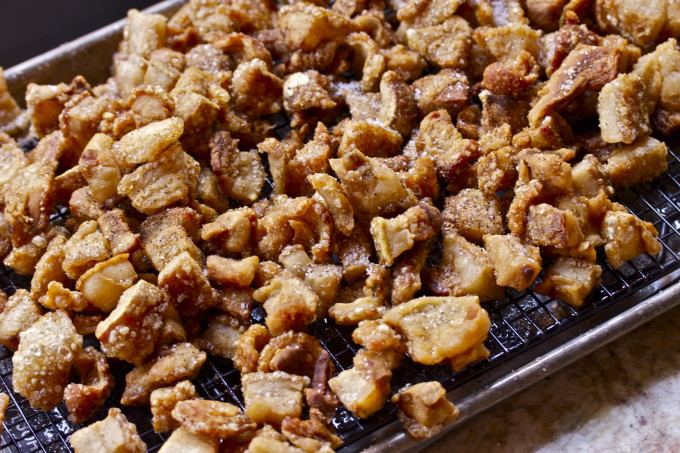 Hot out of the pot and ready to eat. Try this recipe for Cajun cracklins.