A little-known fact is that coastal southwest Louisiana right along the southern portion of Acadiana is built on a series of natural salt domes. Avery Island (home of Tabasco), Jefferson Island and Weeks Island are all built atop geological caverns that house salt formations. Over the past century, these salt domes have been mined commercially and coexisted peacefully right alongside our Louisiana oil and gas drilling industry.  That is, until one morning in 1980. 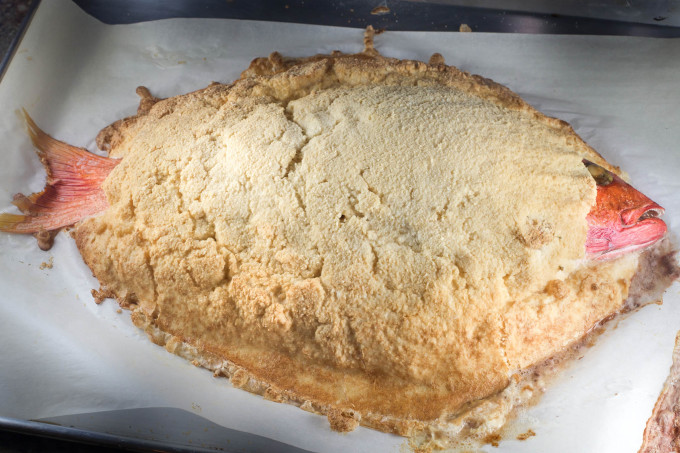 For Salt-Encrusted Red Snapper: Building a salt dome to bake a perfectly moist whole red snapper is easy when you follow my Cajun recipe. (All photos credit: George Graham)

On a beautiful sunny day that year, those two industries collided when a 150-foot tall oil drilling derrick drilled into a salt dome and disappeared into the 10-foot water of Lake Peigneur along the shore of Jefferson Island. Meanwhile, 1300 feet below, dozens of Diamond Crystal Salt workers fled for their lives as the lake’s two and a half billion gallons of water began emptying into the cavern. As the lake drained, it created a giant whirlpool that carried eleven barges, a tugboat, and over 60 acres of land and trees down with it. To see it as it happened, take a look at the short History Channel video below.

So, Louisiana has a colorful history that is just as salty as our Gulf seafood. And no Louisiana cook worth his salt would let that go by without creating a dish to remember it.  I’ve got just the recipe: Salt-Encrusted Red Snapper.

Make no bones about it, I love a grilled fillet of fresh Gulf snapper as much as anyone.  It’s easy and convenient, but over the years, I’ve learned that cooking the whole fish preserves the flavor in a way that fillets cannot. European cooks know this and Asian master chefs have made an art form of it. So, why have American cooks all but abandoned this technique? 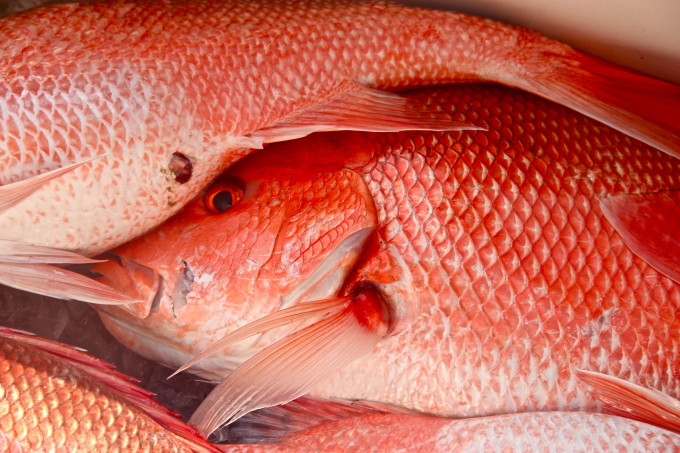 When I saw the 4-pound, fresh-from-the-Gulf, whole head-on red snapper iced down in the seafood case at Tony’s Seafood in Baton Rouge, I had a light bulb moment. Stuff it, season it and roast it whole. Oh, and I forgot one little thing–cover it all in salt.

Ok, I know what you’re thinking; this guy has lost his culinary mind. Nope. Actually, my Salt-Encrusted Red Snapper is a brilliant way to preserve moisture, amp up the flavor and add some dramatic flair to an otherwise simple Cajun recipe. You see, salt-encrusting whole fish is a very European technique that is quite common there in both homes and restaurants. 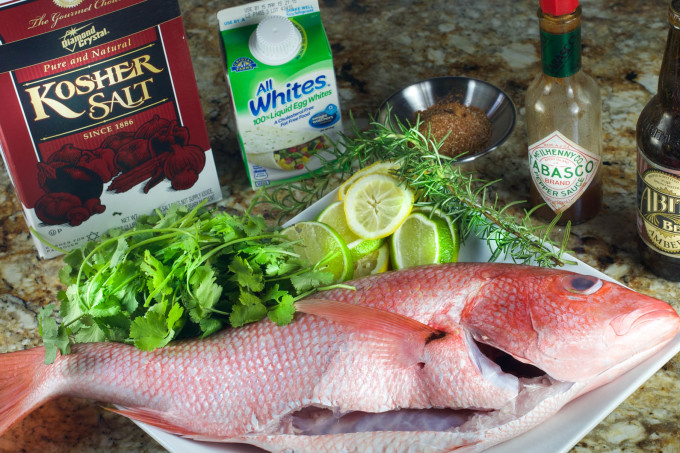 Here in America, not so common. But I will tell you, I once cooked a delicious prime rib using this technique and I was quick to see that salt-encrusting this beautiful snapper was the perfect way to present it to my guests. A big box of coarse salt, some egg whites, a little seasoning, fresh herbs, and citrus were all I needed. Oh, and beer. Yes, you should know by now that if I can find a way to pop open a bottle of beer and infuse that heady flavor of wheat and malt into a dish, I most certainly will. But, when you see my technique, you’ll understand that this Salt-Encrusted Red Snapper is begging for beer. 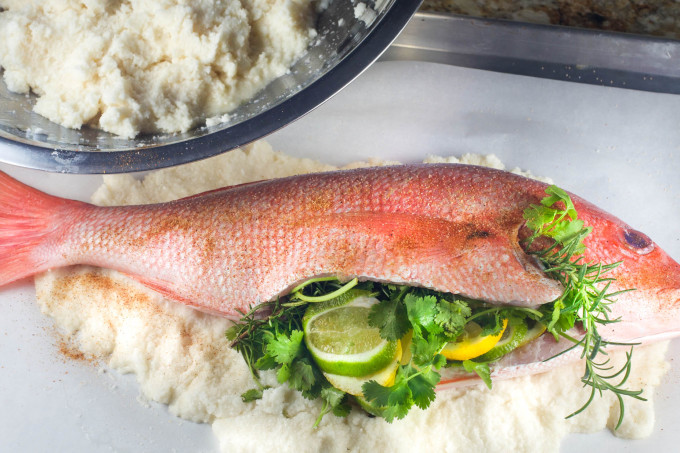 Fresh herbs and citrus infuse flavor as the salt crust steams it to perfect moistness in my Salt-Encrusted Red Snapper.

Prepping the fish with a sprinkle of seasonings and a stuffing of fresh rosemary, cilantro, lemons, and limes is pretty basic. Making the salt crust and building a dome is equally easy–and fun–if you have the right attitude. Think about the last time you built a sand castle on the beach; wet sand in your hands shaping and molding an architectural wonder. It’s just that simple. Take a bowl of salt and wet it with a combination of egg whites and beer (oh, and a shot of Tabasco, of course).   Now you have the perfect dome–and home–for your Salt-Encrusted Red Snapper. 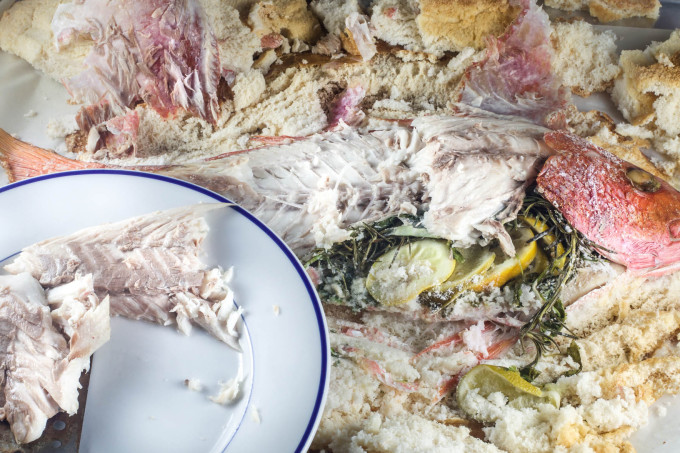 No salt. Just moist flavorful fish off the bone in this Salt-Encrusted Red Snapper.

What happens during the cooking of this Salt-Encrusted Red Snapper is miraculous and quite surprising. The salt bakes solid and traps steam from the beer and infuses the fish with a blanket of moisture and flavor. And not a hint of salt. Yes, once you crack it open and peel back the chunks of salt, all that remains is perfectly steamed, and delicious fish.

Try this creative Cajun recipe for Salt-Encrusted Red Snapper and amaze your guests (and yourself) at how delicious whole fish on the bone can be.

Lake Peigneur Salt Dome Snapper
Print
Prep time
45 mins
Cook time
30 mins
Total time
1 hour 15 mins
Recipe by: George Graham - AcadianaTable.com
Serves: 4
Ingredients
Instructions
Notes
Be sure to use a coarse salt for this, not table salt (it will not form a hard crust). Use a very large baking tray with lots of room for removing the salt at the end of cooking. While this seems like a messy clean up, it’s actually hassle-free by dumping the entire parchment-lined tray full of salt and fish bones straight into the garbage.
3.5.3217 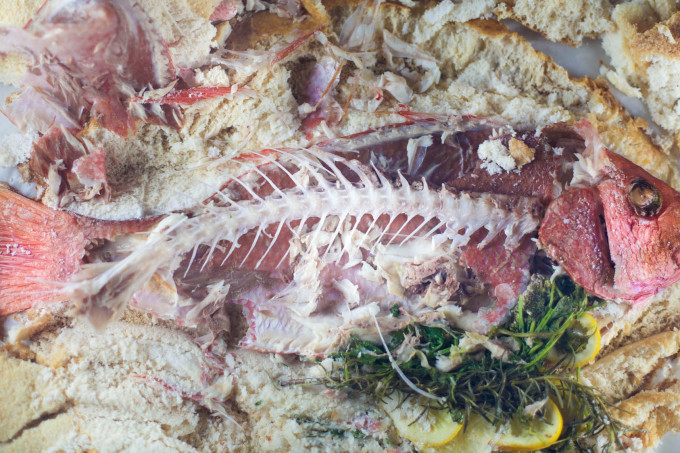 What seems like a mess is neatly discarded from the tray and into the trash.