When I say I’m cooking brisket, most folks immediately think of a slow-smoked Texas barbecue brisket.  And while that iconic dish made famous by our neighbors to the west is a great one and worthy of another posting, that is not at all what I’m talking about.  This is a Beer-Braised Stuffed Brisket–a fork tender version that soaks up all the spicy Cajun flavors. 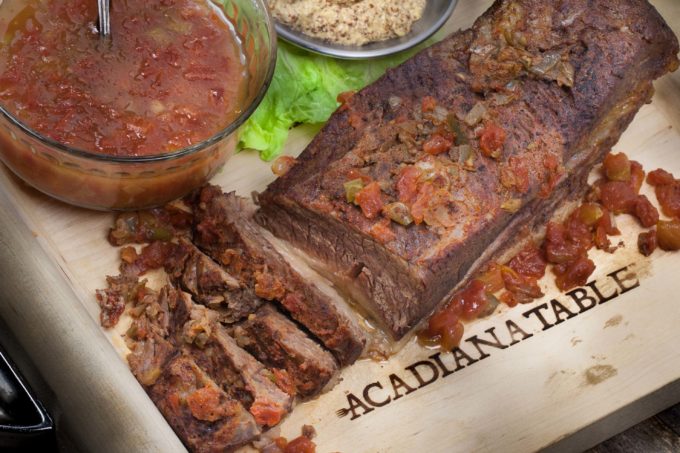 Stuffed with Cajun seasoning and braised in beer, my Beer-Braised Stuffed Brisket is fork tender. (All photos credit: George Graham)

Yankees think of brisket in terms of things like corned beef, pastrami, or a New England boiled brisket.  Again, those are delicious, and in the hands of a master cook can be downright memorable.  But, those briskets are not what I’m referring to either.  Truth be told, South Louisiana is not brisket country.  Oh, we cook it, but it has never been a specialty or anything a bona fide Cajun cook would lay claim to.  Until now. 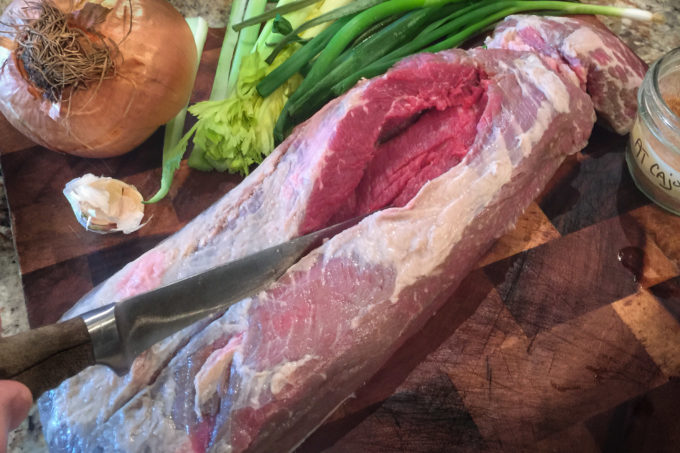 Sliced open, this brisket is ready for stuffing.

My Beer-Braised Stuffed Brisket features a long, slow roasting which is a common South Louisiana cooking technique, and instead of a wine-based braise, I have something more Louisiana in mind. While we love great wine in Acadiana, we do not grow traditional wine-making grapes. Too much heat, rain, humidity and the soil conditions are wrong for serious viniculture.  But beer is another story.  South Louisiana babies are weaned on beer.  Literally.  Many midwives still subscribe to the old beliefs that a baby should be given a bit of beer to cure the colic and soothe the soul. 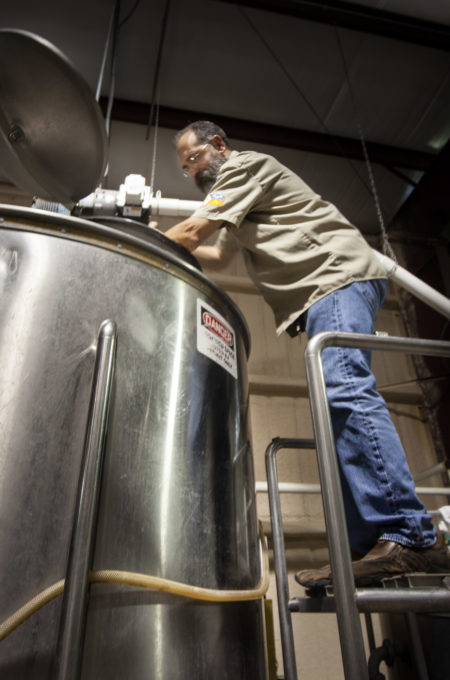 Louisiana brewmaster Karlos Knott has established a stellar reputation for his beer.

Local-grown breweries have cropped up across the state with the Knott Brothers’ Bayou Teche Brewing being one of the best; these guys are serious about their beer. Located in Arnaudville just north of Lafayette in St. Landry Parish, brewmaster Karlos Knott has formulated their beer with the single focus of complimenting the spicy, picante flavors of great Cajun foods.  One of their specialty brews is the dark and complex LA-31 Bière Pâle that according to Karlos, “combines Belgian-style malts and an ample blend of East Kent Golding and Mosaic hops.  It’s a bronze-colored pour with a biscuit malt center, fruity, earthy, and citrusy hop flavors and a gentle bitterness.” Even if you aren’t a beer drinker, try this Beer-Braised Stuffed Brisket, and you will begin to understand the multiple taste points a complex beer can bring to the right dish. 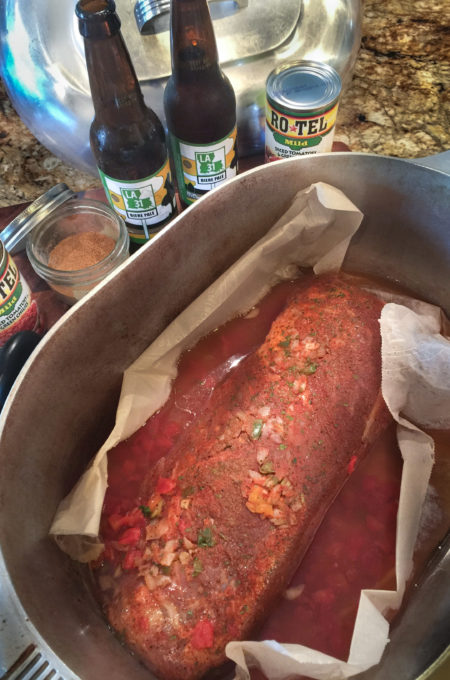 Stuffed, bathed in beer, and spiked with diced tomatoes, this Beer-Braised Stuffed Brisket bakes for 3 hours.

It’s time to cook. With the bold flavors of beer, I know that a slow liquid braise would work well and a beef brisket would be the perfect ingredient.  On the way back from Arnaudville, I stopped at Kirk Martin’s Slaughter House in Carencro on the Beau Basin Road and picked out a trimmed brisket.  Stuffed with the Cajun trinity of vegetables and seasoning with my seasoning blend, this meat self-bastes during the expected 3-hour cooking time.  Remember, this is not a slow-smoked, Texas-style barbecue brisket but rather this Beer-Braised Stuffed Brisket is braised beef that will soak up the beer and bring out its juices to make a rich gravy.  I’m talking soppin’ gravy and enough for a crusty loaf (or two) of French bread, and come to think of it, this Beer-Braised Stuffed Brisket will make a tasty sandwich or po’boy.  Give it a try.

Beer-Braised Stuffed Brisket
Print
Prep time
45 mins
Cook time
3 hours
Total time
3 hours 45 mins
Recipe by: George Graham - AcadianaTable.com
Serves: 4
Ingredients
Instructions
Notes
My brisket is pre-trimmed and compact for a small group, feel free to buy a larger brisket and trim it yourself. You will need to scale up the amount of ingredients to accommodate the size of your meat. The meat will shrink during the long cooking. Notice there is no added salt or pepper, and the Rotel is mild; let the Cajun seasoning do the spice work in this recipe. One idea I might try next time is adding small, new potatoes to the braising liquid to soak up the beer and meat juices. This brisket has a spectacular flavor profile and is versatile enough to be served hot, room temperature or even cold on a sandwich days later.
3.5.3217 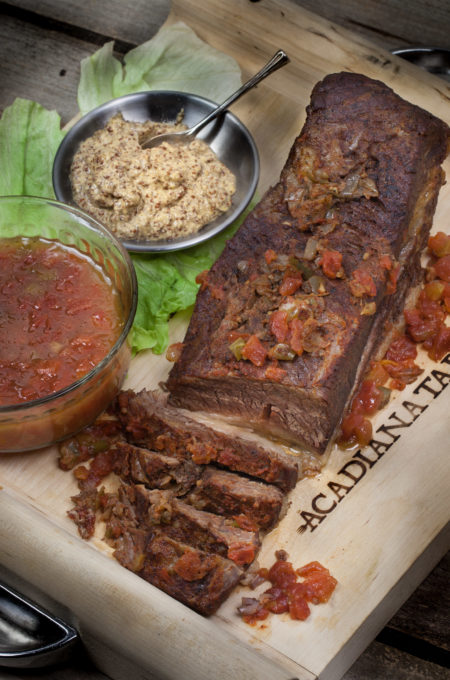