This Hopper Popper might be the best single-bite appetizer you’ve ever tasted. A spicy jalapeno pepper filled with Brie cheese surrounds buttermilk-brined rabbit meat in a smoky bacon-wrapped package that is deep-fried golden brown. Oh yeah! 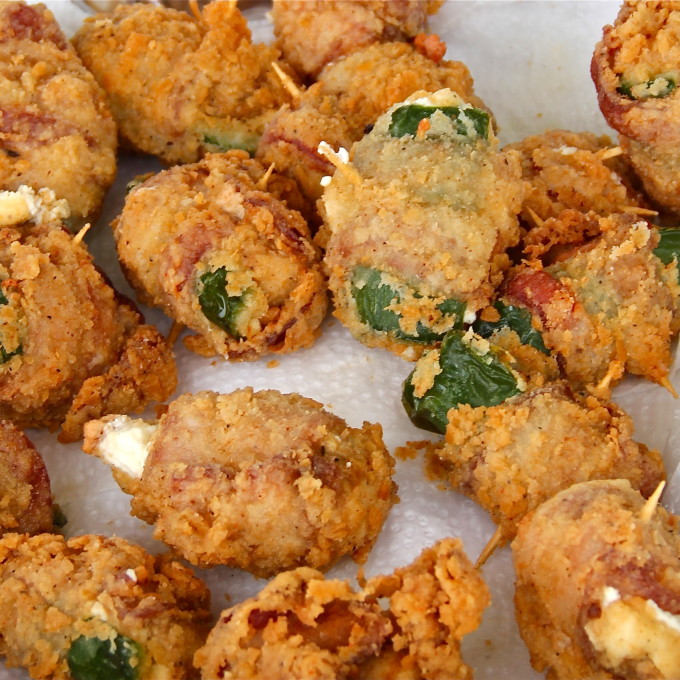 Not quite sure when this whole “popper” thing burst onto the Cajun food scene, but my hunch is it traveled across the Sabine River like many other Texas transplants.  Sometime back in the 1990s, I began hearing about hunting camp cooks serving up jalapeno peppers stuffed with wild things wrapped in bacon.  Today, I can’t go to any supermarket, neighborhood grocer, or restaurant and not see it offered.  But these Bacon-Wrapped Rabbit Poppers – aka Hopper Poppers –  take this dish to a Cajun extreme.

Some years ago, I gave in to the mounting pressure to welcome this dish onto my Acadiana Table.  I’ve experimented with all sorts of versions – smoked duck, ribeye steak, and even dove – but it was a trip to Iowa, Louisiana, and their annual Iowa Rabbit Festival that sparked my inspiration for this variation.

Long ago, the small town of Iowa, one hour west of Lafayette, was home to Acadiana’s largest rabbit processing operation.  In 1986, the Iowa Rabbit Festival was launched to promote the industry, and over the years, it has become a popular regional food and music event.  The cook-off was in full swing when I arrived, and over 25 competitors were busy cooking rabbit dishes that defied imagination.  Amanda and Luke Deville from Teet’s in Ville Platte were juggling two great dishes–a Rabbit Cacciatore and their Rabbit Sauce Picante. Mike Casey from Lafayette had a tasty Rabbit and Spaghetti, and Angie Dugas was busy interpreting a Coq Au Vin with rabbit instead of a rooster. 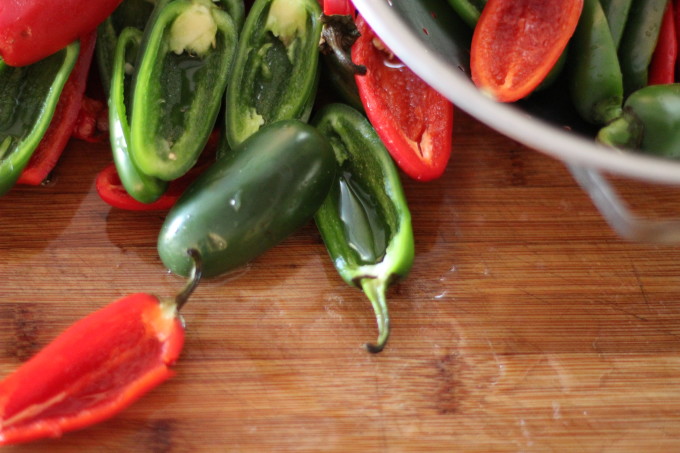 Fresh jalapenos halved and hulled out.

A steady line was building for one booth on the end that was turning out what proved to me to be a clear creative winner — Bacon-Wrapped Rabbit Poppers.  Sean Bourque, a local amateur, was serving up his battered and bacon-wrapped rabbit stuffed with cream cheese in a hollowed-out jalapeno pepper and fried golden brown.  I downed two of the bite-sized flavor bombs.  This Bacon-Wrapped Rabbit Poppers recipe was a revelation as it fired on all cylinders–spicy, sweet, smooth, and crunchy.

In my Cajun recipe for Bacon-Wrapped Rabbit Poppers, I follow Sean Bourque’s lead on the idea of this dish, but I am creatively deviating in execution.  Rabbit is tame-tasting meat with a certain mildness that needs to be augmented with flavor, so I am marinating the rabbit in a buttermilk and beer-infused bath.  And most all poppers contain cheese–mostly plain cream cheese.  This is a direction that you can easily improve upon, and I am going with a creamy French Brie for an “ooh la la” classy contrast that balances out the jalapeno bite. 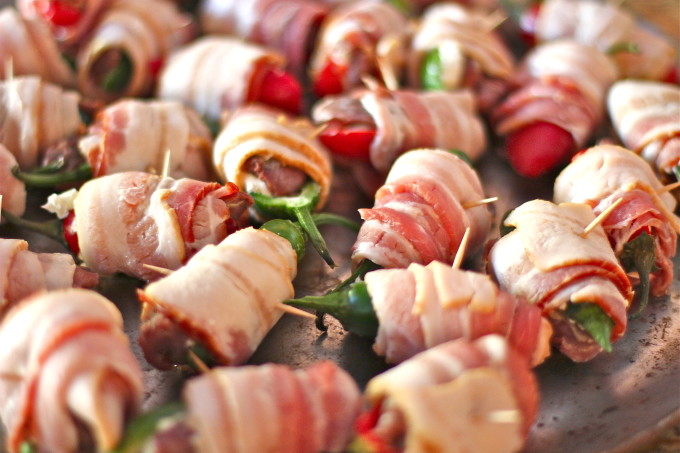 The prep time is the main investment in this recipe for Bacon-Wrapped Rabbit Poppers since these little packages take only a few minutes to cook.  On occasion, I pop open a six-pack of beer and put my friends to work in the assembly process that they always seem to enjoy doing with this dish.  With all the ingredients organized and ready for assembling, it’s a cinch.

5.0 from 1 reviews
Hopper Poppers: Bacon-Wrapped Rabbit Poppers
Print
Prep time
90 mins
Cook time
30 mins
Total time
2 hours
Recipe by: George Graham - AcadianaTable.com
Serves: 48 pieces
Ingredients
Instructions
Notes
A couple of cleaned rabbits will yield enough meat to make about four dozen of these poppers. I use both the green and red jalapenos for presentation sake as the flavor and spice level are identical. Use a regular-sliced applewood smoked bacon as I find the thick-cut to be, well, too thick. This is not as much about the bacon as it is what’s inside. Frying temperature is crucial with this recipe in order to cook the interior rabbit and bacon without overcooking the exterior crust. I recommend using a thermometer to maintain the heat level to 350ºF.
3.5.3217 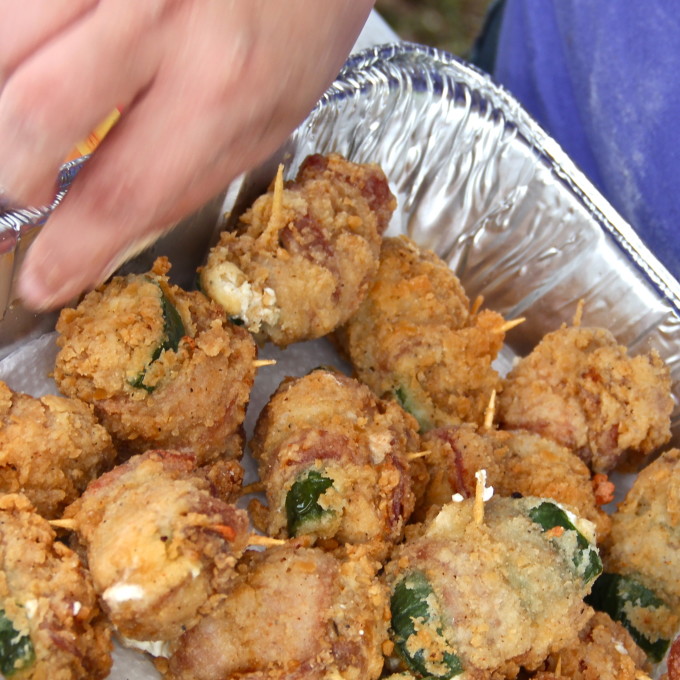