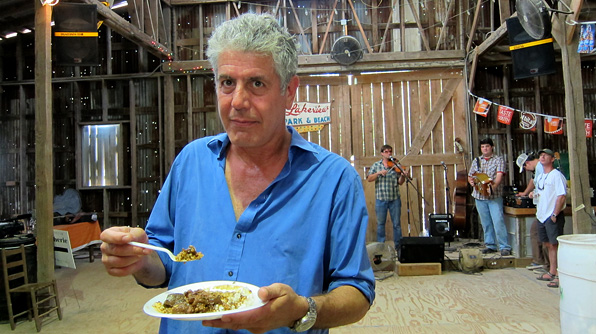 Anthony Bourdain dives into Cajun cooking at a boucherie near Eunice, LA.

Anthony Bourdain – June 25, 1956 – June 8, 2018.  Until his untimely passing, he wrote about our Cajun culture with passion.  His talent was in cutting to the core and sucking out the marrow of a story with words that ooze truth.  In 2011, with his Travel Channel crew in tow, Bourdain came to South Louisiana and in one 30-minute segment of No Reservations, he clearly defined Cajun culinary culture.  And even now, his second episode on Cajun Mardi Gras will air on CNN’s Parts Unknown on June 17. He was truly an ambassador of our culture and we will miss him.  Rest in peace, my friend.