For me, onion rings are a weakness bordering on obsession; a perfectly fried o-ring is a thing of beauty.  When dining out, I order them constantly and will even pay a couple of bucks more to substitute onion rings for fries.  While some are good, and others just acceptable, I am mostly disappointed.  Even at home, I have tried many different approaches and an assortment of flavor enhancers, but I still can’t truthfully call myself a ringmaster.  Until I discovered my Cajun onion rings. 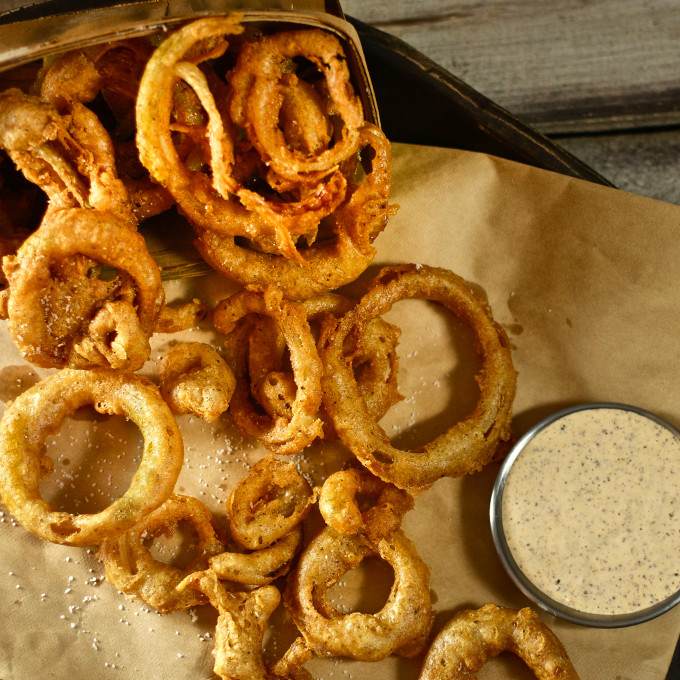 This is the definitive onion ring, or should I say, the definitive Crazy-Crisp Cajun Onion Rings.  It is the crazy level of crispness that is achieved in this Cajun recipe technique that sets this one apart.  It took tons of research and numerous trial-and-error-and-trial-again attempts to arrive at this formula (and it is a scientific formula rather than a recipe), but follow it, and you will achieve o-ring greatness.

Years ago I learned an Asian trick of using rice flour for crispness and most recently I stumbled on Wondra flour as a magic ingredient.  When you combine these ingredients along with White Lily self-rising flour, you have a formula for crackling crispness.

Flavor is another subject altogether.  My Cajun Onion Rings recipe version adds a thing or two that I believe separates these from the rest of the pack.  A heavy dose of Cajun seasoning in the soaking as well as in the batter adds just the right amount of spice. Find a sweet onion for gentler flavor and soak them.  Use a beer batter to give malty heft to the batter and add cane vinegar for a bit of zing.  Oh, and another thing–lard. 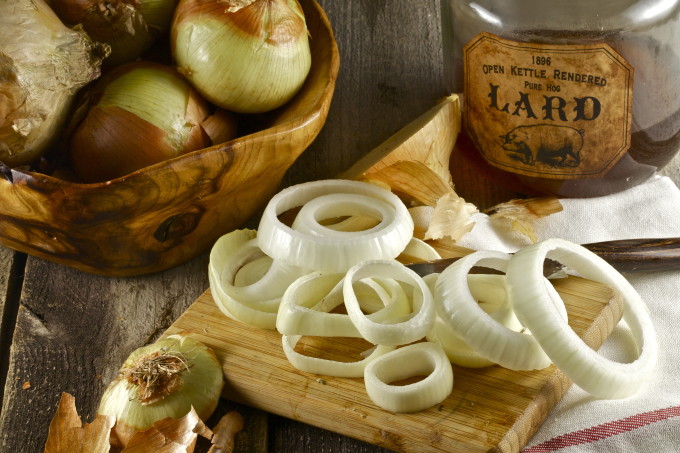 Cut your onions in varying sizes at a medium thickness, and fry in lard for a Cajun onion rings recipe twist.

I’ve found that frying in hog’s lard creates a crispness that is hard to duplicate with any other fat.  Also, there is nothing that imparts flavor better than rendered hog lard and, even more importantly, I had a freezer full of cubed pork fat from the butchered whole hog I recently bought from farmer Charles Thompson.  But, here’s a surprise.  After reading some online research on the subject of lard, I discovered another reason–it’s healthy.

Praise the lard!  Yes, according to some great research at Healthy Green Kitchen, the dreaded pig fat is actually a vitamin-enriched and clean oil that can be used in a variety of ways.  The research is quick to point out that we are talking about rendered fat from a grass-fed, pastured pig, not commercially available generic lard that you buy in the supermarket.

Fresh properly rendered lard is actually as healthy as olive oil and contains mega vitamin D and has less saturated fat than butter.  Now, I am not expecting you to go “pioneer” on me and begin raising your own hogs and rendering fat, but it does open up a whole new way of looking at our local food supply.  And after all, that’s what the Cajun recipe focus of Acadiana Table is all about.  Also, if you want to experiment with locally-rendered, clean hog lard then Don’s Specialty Meats in Scott, Louisiana has done the work for you–you can buy it in gallon jars. 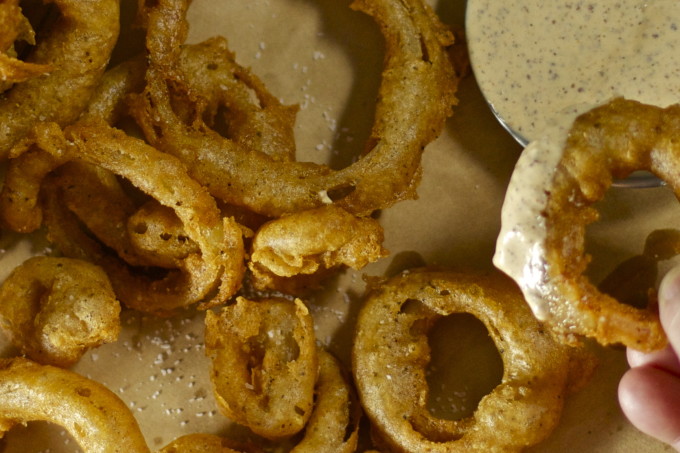 I think one of the key lessons here is how to fry your onions so the batter doesn’t come off in your mouth with the first bite.  This annoying trait of thick-cut onion rings is one of the reasons I am in such awe of perfectly cooked ones when I find them.  Seems the key to this is eliminating moisture.  The thickness of your ring will determine how much moisture leaches out of the rings during frying.  Too thick and you have a mouthful of batter and an exposed steaming slice of onion.  I go for a medium thickness to insure crispness.

Believe me, these crazy crispy Cajun Onion Rings are worth pursuing, and with these Cajun recipe steps you too will become a ringmaster.

Crazy-Crisp Cajun Onion Rings with Spicy Mustard Aioli
Print
Prep time
45 mins
Cook time
30 mins
Total time
1 hour 15 mins
Recipe by: George Graham - AcadianaTable.com
Serves: 6 to 8
Ingredients
Marinade
Mustard Aioli
Onion Rings
Instructions
Marinade
Mustard Aioli
Onion Rings
Notes
Use a full-bodied beer like an IPA. Don’t crowd the pan when frying, It is best to use as wide a pot or pan as you can so that the onions can spread out and crisp without sticking to each other. I render my own lard, but any good butcher worth his salt pork should be able to rig you up.
3.5.3217
YOUR SEAT AT THE TABLE: If you like this Louisiana cooking story and Louisiana recipe then accept my personal invitation to subscribe by entering your email at the bottom or top right of this page.  It’s quick and painless.  You will receive an email alert and be the first to see when new Louisiana cooking stories and Louisiana recipes are added.
Thanks, George.