Garlicky, buttery, cheesy with a hint of herbs, these are bold flavors that complement the goodness of a Louisiana oyster cooked on open flame. My Grilled Oysters on the Half Shell are a culinary masterpiece, and it doesn’t get any simpler. 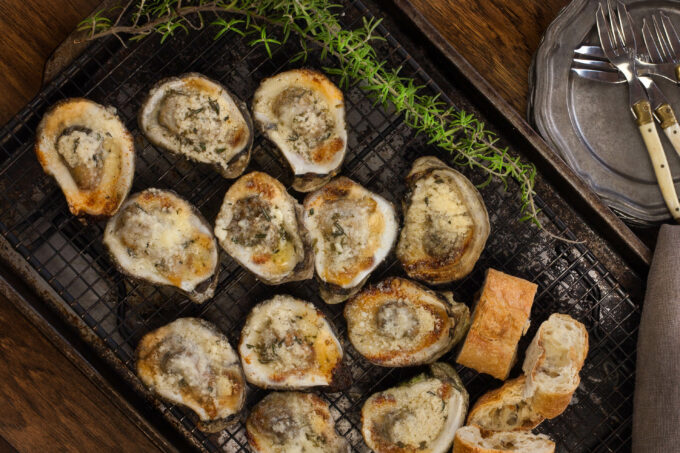 Charred along the edges and steamed to perfection, these oysters are perfect in every way. (Photo credit: George Graham)

Hands down, the invention of the char-grilled oyster on the half shell is a watershed moment in the evolution of Louisiana food culture. Drago’s Seafood owner Tommy Cvitanovich is universally credited with inventing the recipe over two decades ago out of necessity when a raw oyster-eating health scare threatened the industry. A classic was born. Now, this dish is imitated and duplicated in varying forms all over the nation, but the New Orleans-based eatery is still the best.

Up until now, cooking half-shell oysters meant buying a sack of oysters and hours shucking with an oyster knife. Lucky for us, the barrier to entry into the world of half-shell oysters just got easier. A new process that freezes oysters on the half shell is finding a wide audience that makes access to this delicacy convenient and cost-effective. It’s a method invented by the folks at Motivatit Seafoods based in Houma, LA. Watch our short, how-to video as Rox, Lo, and I show you how easy this recipe is, and meet Naomi Porche with Motivatit Seafoods to discover their extraordinary product.

Gold Band Frozen Half Shell Oysters were created using two state-of-the-art technologies. First, they undergo their high-pressure process, which shucks the oyster. Next, the oysters are cryogenically frozen. The result is a fully detached, perfectly presented frozen half shell oyster. Not only is this a labor-saving product for restaurants, but it is also now in demand with home cooks for backyard cookouts, hunting camps, and tailgating. 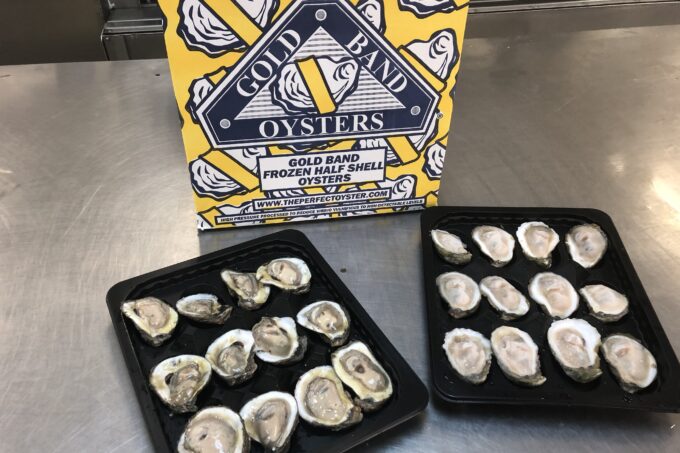 Gold Band flash-frozen oysters on the half-shell from Motivatit Seafoods are sorted on trays and boxed for shipping. (Photo credit: George Graham)

These frozen half-shell oysters are perfect for home cooks and wholesale buyers (restaurants and retailers) alike. They can be taken out of the freezer a dozen-at-a-time to throw on the grill at a moment’s notice. Grilled frozen, they thaw and cook quickly, preserving the oyster’s flavor and texture. That’s a game-changer. 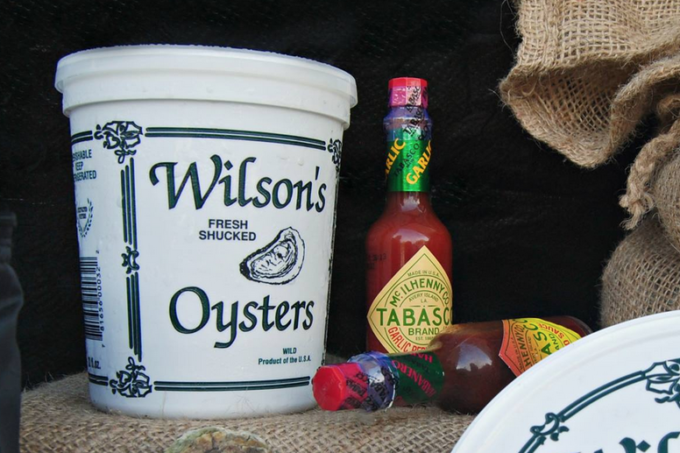 Frozen half shell oysters can be bought from Motivatit Seafoods in Houma, Wilson’s Oysters also located in Houma, and from retailer Josh Boudreaux of Southern Seafood based on Hwy 90 between New Iberia and Broussard, LA. Be sure to connect with other coastal Louisiana fishermen by accessing the contact information on the Louisiana Direct Seafood website. It’s a free service, and it’s nice to know that you are helping to support the many fishing families that are the foundation of our Louisiana seafood industry. 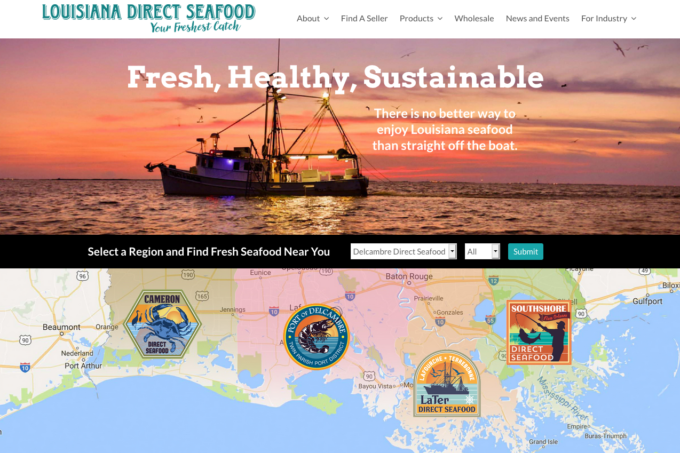 Why flame-grilled? Think about it: Oysters are delicate creatures that are best eaten raw, but if cooked, it takes only a gentle touch to preserve the briny flavor and unmistakable texture of the bivalve. And flash-cooking over flame with the protective half-shell forming a barrier is nature’s work at its best. The butter sauce spills, the flames ignite, the smoke plumes, and the oyster cooks gently in just a few minutes. Another dozen, please! 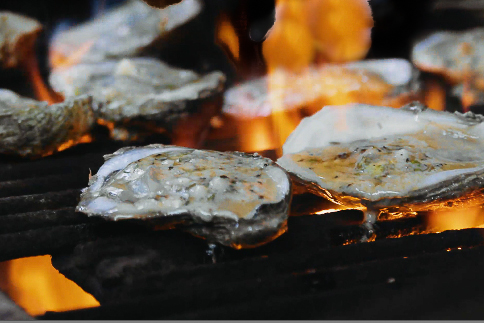 This recipe is a cinch. Once you have your oysters, the sauce is the key. There are a variety of flavor directions to go in saucing your oysters, and I’ve tried them all. But I can say without wavering; butter is best. Butter infused with garlic, cheese, herbs, and spices, to be exact. Oysters cloaked in this rich sauce is missing only one thing—crusty French bread. So, fire up the grill and give this classic Grilled Oysters on the Half Shell recipe a try.

5.0 from 2 reviews
Grilled Oysters on the Half Shell
Print
Prep time
30 mins
Cook time
10 mins
Total time
40 mins
Recipe by: George Graham
Serves: 1 dozen
Ingredients
Instructions
Notes
If using the frozen half-shell oysters, place them on the grill frozen; they will thaw in just a minute or two, and then you can add your sauce. Watch carefully. Your grill will have hot spots where the oysters will cook quicker than others; remove those oysters earlier to prevent burning. These half-shell oysters can be prepared in a 400ºF oven, but you will miss the flavor of the smoke and flame.
3.5.3217 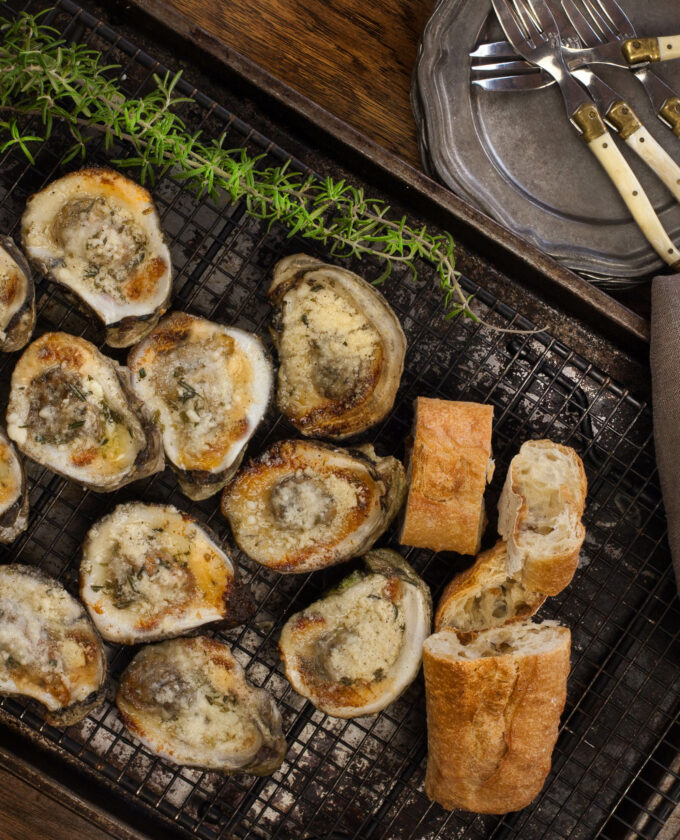 Buttery, garlicky, and cheesy–Louisiana oysters on the half shell are delicious right off the grill. (Photo credit: George Graham)