A black pot of Cajun Pork Jambalaya is a defining Cajun recipe that speaks the language of Louisiana. But as is the case with many Louisiana dishes, there are two distinctly different styles of jambalaya in Louisiana–Creole and Cajun. 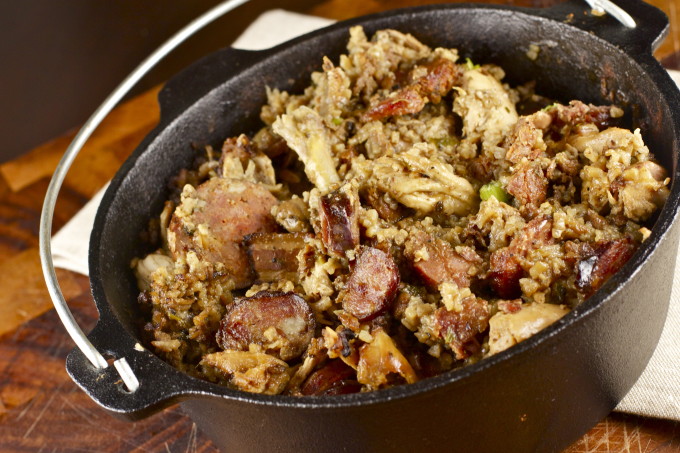 Perhaps, it is this Cajun recipe that most defines the two culinary cultures. The point is that Creole jambalaya includes tomatoes while traditional Cajun pork jambalaya does not.  On the other hand, a Cajun recipe for jambalaya has a smoky, spicy flavor that originates from readily available smokehouse meats along with access to fresh-killed poultry or the bounty of the swamp. These are the building blocks of a tasty jambalaya and improvisation results in innovative combinations that become classics.

I’ve discovered that one key to great Cajun pork jambalaya is to sauté and brown all of the ingredients–meats and vegetables–in a cast-iron pot. This is what gives a Cajun recipe for jambalaya its bronze color and rich flavor.  In addition, I like to deglaze the pot with beer before adding the stock and long-grain rice.

But to become a jambalaya master, it is important to start first with a basic rural Cajun pork jambalaya. In all Cajun cooking, this is a dish you will always see at a traditional French Acadian boucherie–the slaughtering of a whole hog. Armed with fresh pork, a variety of smoked sausages along with vegetables, herbs and spices, this Cajun recipe will introduce you to the fundamental principles. Soon you will be ready to jump into jambalaya cooking to explore the delicious depth of Cajun cooking.

5.0 from 20 reviews
Cajun Pork Jambalaya
Print
Prep time
45 mins
Cook time
90 mins
Total time
2 hours 15 mins
The keys to jambalaya are fresh ingredients and perfectly steamed rice. Some folks cook jambalaya on the stovetop, but I've adopted an easier, foolproof oven method. When the pot is in the oven, cover tightly with a heavy lid and do not peek — steam cooks this dish. When removed from the oven, do not stir the jambalaya. If you do (and I warned you), it will become a mushy, sticky, starchy mess. Follow the recipe and you will become a jambalaya master.
Recipe by: George Graham - AcadianaTable.com
Serves: 6
Ingredients
Instructions
Notes
One key to this dish is using a dark rich chicken stock; I make my own and you can get my recipe here.
3.5.3217 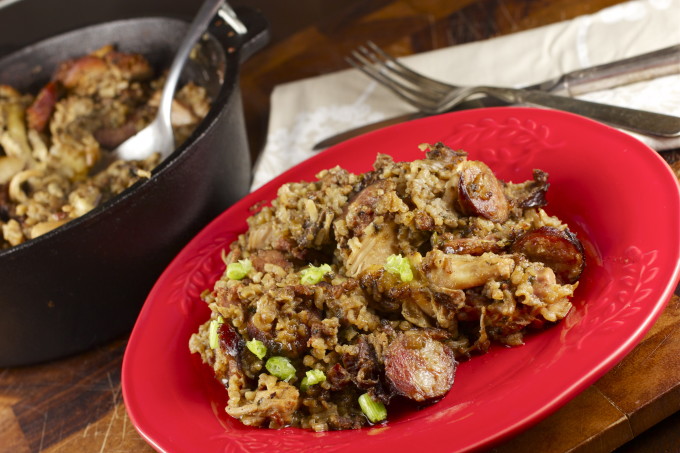