Just think of it: With my recipe for Two-Step Boiled Louisiana Crawfish, it’s whole crawfish boiled to perfection and then drenched in a spicy cauldron of Asian flavors. Ginger, orange, garlic, peppers and lemon with a velvety cloak of rich butter sizzling in a wok filled with three pounds of boiled crawfish just sucking up the flavors of another culture. Oh yeah, got your attention, huh? 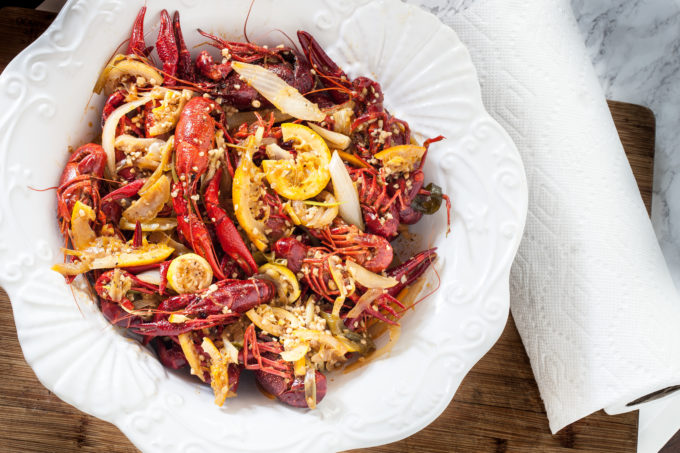 I was reluctant. I was skeptical. I was dragged kicking and screaming into an Asian restaurant in Houston to eat boiled Louisiana crawfish in a totally new way.  Okay, I admit it: At some point, my insatiable culinary curiosity kicked into overdrive, and I just had to find out what all the fuss was about. How could boiled crawfish, my Louisiana birthright, be improved? Impossible! Perfectly seasoned, boiled to perfection, whole Louisiana crawfish served up steaming hot is as good as it gets. Or so I thought.

As a writer that covers the Cajun food beat, I would be negligent in my job if I didn’t let my readers know about the crawfish frenzy that’s happening just over the border in Texas.  While my story is sure to provoke the ire of many diehard Cajuns, I follow the philosophy of “if you can’t stand the heat, get out of the kitchen.”

First things first, we’re talking about local Louisiana crawfish here, not the inferior Chinese import.  And second of all, I love Asian food—Vietnamese especially. Lemongrass, galangal root, fish sauce, and star anise hang out in my pantry with more familiar Cajun and Creole ingredients. And that co-mingling of cultures is at the heart of why this dish works so well. Yes, my story is about the love affair that the Asian immigrant community has with our Cajun culture of boiled crawfish. It was inevitable: East meets West; crawfish boiling pot meets hot wok; spice meets flavor. 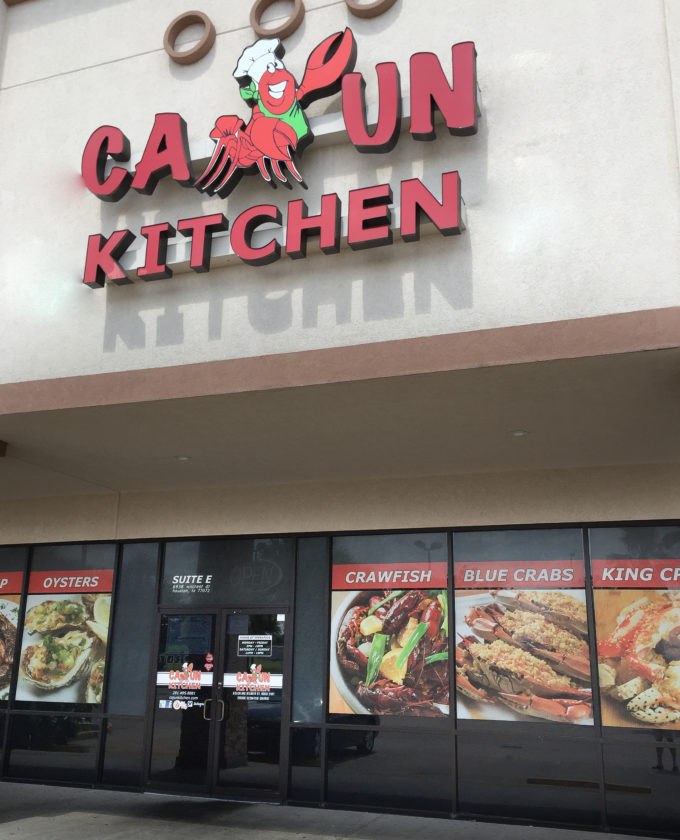 Vietnamese-owned Cajun Kitchen near the corner of Bellaire and Wilcrest is the mecca of spicy boiled crawfish in Houston.

The French connection between Vietnam and Louisiana is entwined in both the history and the culinary culture. The coastal waters of South Asia are similar to South Louisiana, and hundreds of thousands of Vietnamese immigrants escaping the war in the 1970s and 80s found their way to a familiar home along the Gulf coast. Over 300,000 Vietnamese live in Houston alone. And a vibrant ethnic economy has erupted there with hundreds of Asian restaurants lining the blocks along Bellaire in the Southwest part of town. 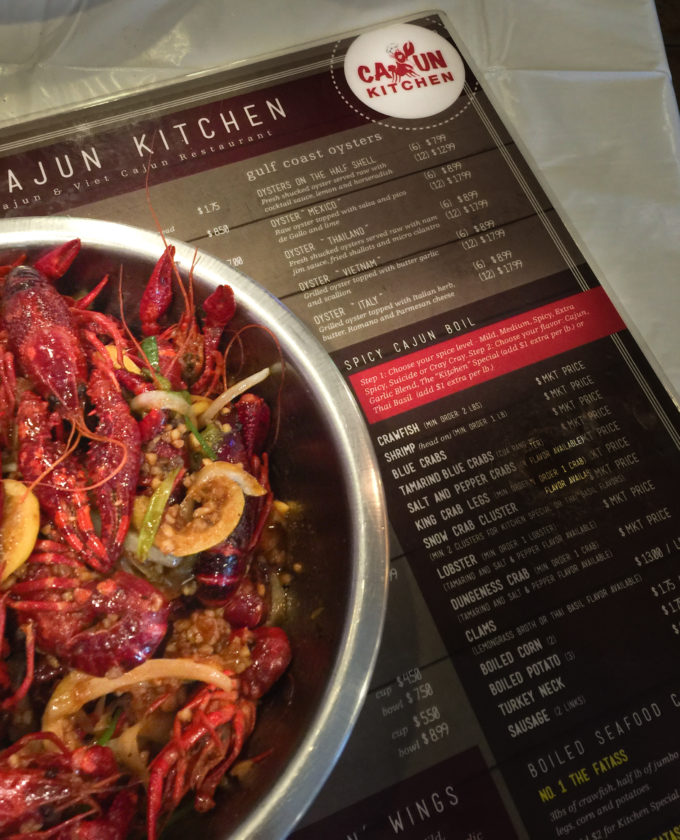 The “Kitchen Special” is the hottest seller on the menu.

In Houston, our Louisiana crawfish are prized, and it was just a matter of time–the late 1990s or early 2000s, they say– before it made its way into a steaming hot wok. This is a two-step process; Cajuns figured out the hard part–seasoning and boiling the crawfish. But the Vietnamese have taken it a step further–adding a stir-fried, spicy sauce. And this dish called Viet-Cajun crawfish has taken Houston by storm. Restaurant names like Crawfish and Noodles, Wild Cajun, Hank’s Cajun Crawfish, and Cajun Corner are all Vietnamese-owned and feature their unique take on the dish. John Nguyen’s Cajun Kitchen has quickly become my favorite for their version of Viet-Cajun boiled crawfish called the “Kitchen Special”—an addictive combination featuring a buttery, citrus-infused, and garlicky cloak of sauce. It is the inspiration for my Two-Step Boiled Louisiana Crawfish recipe.

Not convinced? If you’re a dyed-in-the-wool, down-home Louisiana boy like me and feel this Asian invasion is a culinary assault on Cajun tradition, then think of it in another way. You like our familiar Cajun boiled shrimp, but you also like the Italian-invented, New Orleans barbecue shrimp drenched in garlic butter as well. While those two shrimp dishes are uniquely different on so many levels, they are both delicious. And the same can be said about this Two-Step Boiled Louisiana Crawfish dish. 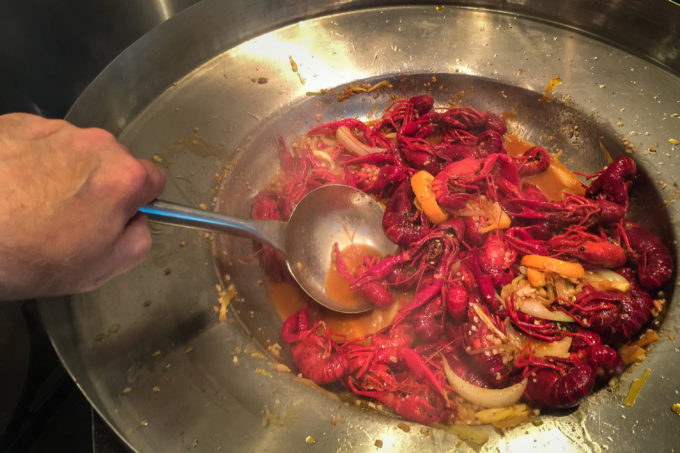 Step 2: A quick turn in a wok layers on the buttery, garlic-infused sauce of my Two-Step Boiled Louisiana Crawfish.

Don’t get me wrong, I’m still (and forever will be) a traditionalist when it comes to Louisiana boiled crawfish.  For me, it doesn’t get any better.  But each season, you might catch me breaking out the wok (or my black iron pot) for a Louisiana crawfish two-step of flavor.   Give my Two-Step Boiled Louisiana Crawfish a try, and like me, you just might like it, too.

5.0 from 5 reviews
Two-Step Boiled Louisiana Crawfish
Print
Prep time
30 mins
Cook time
15 mins
Total time
45 mins
Recipe by: George Graham - AcadianaTable.com
Serves: 1
Ingredients
Instructions
Notes
Cooking time does not include boiling crawfish. This recipe is for one individual portion (3 pounds) of crawfish; scale up the ingredients to make more. Parkay butter (actually margarine) sold in the big blue squeeze bottle is the choice for this dish, but using regular unsalted butter works, too. My recipe is medium spicy; add more Cajun seasoning (or cayenne) if you like it hotter (the extra spicy version of the Kitchen Special I tried had habañero chili peppers, ouch!). Dipping sauce isn’t necessary with this style of crawfish, but feel free to mix up your favorite. Also, add the usual boiled corn, onions and potatoes to the party as well; they are delicious covered in the buttery sauce.
3.5.3217 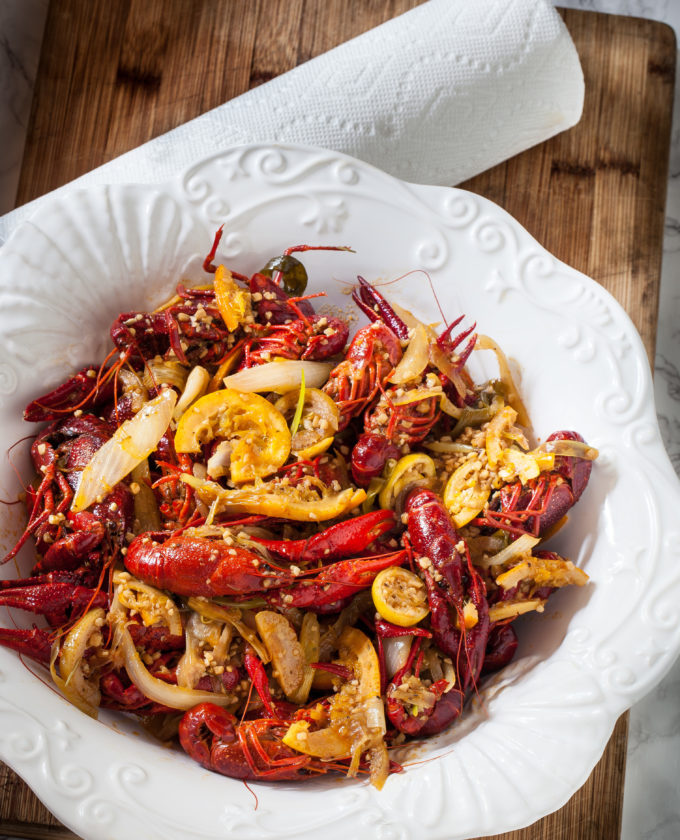 « Chicken Marsala
Singin’ the blues with my Blueberry Basil Pastry »