For obvious reason, here in South Louisiana a bánh mì sandwich is referred to as a Vietnamese po’boy. Built upon a similar French bread loaf, it doesn’t take a great stretch of imagination to see the similarities in the two sandwiches. But delving deeper, the two have even more in common than just bread.  And just one taste of my fried Catfish Bánh Mì, and you’ll understand the cross-cultural connection. 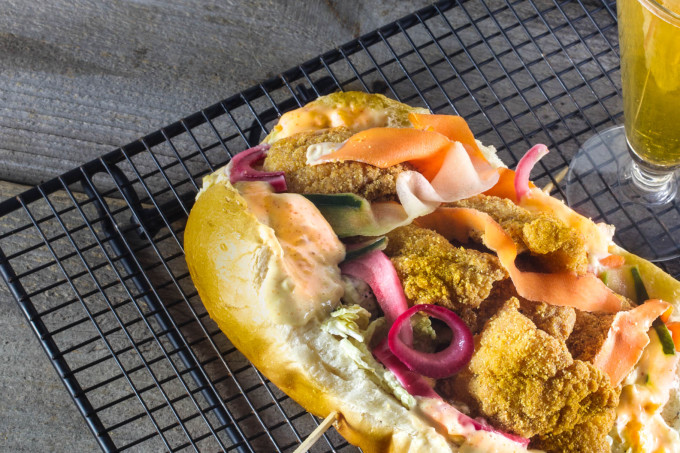 Like the early French Acadians of Louisiana in the late 1700s, a century later the French came to Vietnam during the Indochine era of 1887 to 1946. The influence on the culinary culture of Southeast Asia was unmistakable as French bread baking and the introduction of cooking methods for dishes like liver pâté and even mayonnaise became intermingled with local tastes and techniques. Like the Cajun and Creole cultures of Acadiana, over time unique recipes linking the two cultures became mainstream–the bánh mì sandwich being a prime example.

Bánh mì is literally Vietnamese for bread and the use of the ubiquitous French baguette led to its current sandwich interpretation. The classic bánh mì is a combination of meat–usually pork–along with a slathering of pâté crowned with pickled vegetables and fresh herbs.

For my Cajun recipe version for a bánh mì, I’m going with a focus on catfish, an indigenous fish and common culinary ingredient of both Louisiana and Vietnam. Fried crispy golden brown, the fish is set on a bed of crunchy slaw and topped with pickled red onions, carrots, and cucumber.  A slathering of spicy mayonnaise replaces the liver pâté for a more mainstream Southern taste in this Cajun recipe for a Catfish Bánh Mì.  This sandwich has just the right balance of flavors. Try my Vietnamese po’boy — uh, Catfish Bánh Mì — and add some international flavor to your Acadiana table.

4.0 from 1 reviews
Cajun-Fried Catfish Bánh Mì
Print
Prep time
45 mins
Cook time
45 mins
Total time
1 hour 30 mins
I love this bánh mì sandwich because it has all the elements of a traditional Southern fish fry; crispy catfish, creamy slaw and crunchy pickles all rolled up into one neat package.
Recipe by: George Graham - AcadianaTable.com
Serves: 4
Ingredients
Pickled Vegetables
Spicy Mayo
Catfish and Assembly
Instructions
Pickled Vegetables
Spicy Mayo
Catfish and Assembly
Notes
The pickled vegetables I use are what I had on hand; you could easily use fresh radish or daikon as well as any number of vegetables. Like my recipe for Crazy Crisp Onion Rings, the Wondra and rice flour are used for added crispness in the fried catfish. Try it on most any fried foods.
3.5.3217
YOUR SEAT AT THE TABLE:  If you like this Cajun cooking story and Cajun recipe then accept my personal invitation to subscribe by entering your email at the bottom or top right of this page.  It’s quick and painless.  You will receive an email alert and be the first to see when new Cajun cooking stories and Cajun recipes are added.  Thanks, George.